The Maritimes Region is one of the largest and most diverse of the six Fisheries and Oceans Canada administrative regions across Canada. We serve a broad spectrum of clients including fishers and their associations, Aboriginal community members, shipping and port users, aquaculturists, recreational boaters, academia, communities, non-profit organizations, environmental groups, and other federal and provincial government departments. Our work is vital to Canadians in this region.

Departmental policies and programs are delivered in support of Canada's economic, ecological, and scientific interests in the ocean and freshwater environments. With the ocean as our common thread, we aim to effectively coordinate a range of diversified operations and activities related to fisheries resource management, sustainable aquaculture, marine transportation services and safety, marine environmental protection, scientific research, and federally owned small craft harbours. 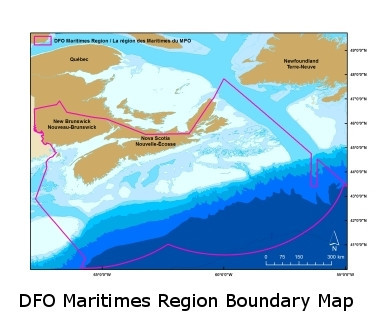 The management of the fisheries in the Maritime Provinces is shared between two DFO regions - The Maritimes Region (headquartered in Dartmouth, Nova Scotia) and the Gulf Region (headquartered in Moncton, New Brunswick). The Maritimes Region, known as the Scotia-Fundy Fisheries Management Sector, extends from the northern tip of Cape Breton to the New Brunswick-Maine border. The Gulf Region extends from the New Brunswick-Quebec border to the northern tip of Cape Breton.

Regional Science programs, and Ecosystems Management programs, are carried out by numerous scientists, oceanographers, hydrographers, technicians, advisors, managers, and support staff working at four different sites throughout the Region, including two major research facilities. These are the Bedford Institute of Oceanography (BIO) in Dartmouth, renowned as Canada's largest centre for ocean research, and the St. Andrews Biological Station (SABS) in New Brunswick, founded over 100 years ago and the first facility of its kind in Canada.

Our Fisheries Management operations support an increasingly valuable fishing industry. The Fisheries and Oceans Canada Maritimes Region fishery accounted for 39% of the total Canadian landed value in 2012 (or $757 million) and the second most productive aquaculture region of the country falls under the jurisdiction of the Maritimes Region.

The Fisheries Management Program manages the Region’s fisheries resources, which are harvested for Aboriginal, commercial, and recreational purposes in marine and inland waters. The objective of the Program is to conserve fishery resources, and to manage the fisheries to ensure sustainable use and viability while providing economic benefits to local coastal communities.

Fisheries Management develops regulations and administers the licensing of fisheries operations, provides conservation, protection and enforcement of fishing activities, and develops Aboriginal fisheries agreements. Our staff consults with the fishing industry through Fisheries Advisory Committees. Hundreds of these Advisory Committee meetings are held each year, making the fisheries one of the most openly consulted and collaboratively-managed Canadian industries.

The Maritimes Region respects Aboriginal rights to fish, as determined by the Supreme Court of Canada's 1999 Marshall decision and others, such as Sparrow. To address the government's obligations and to encourage increased self-reliance for First Nations, the Department has various programs and initiatives to increase Mi'kmaq and Maliseet communities' participation in the Atlantic commercial fishery.

Aquaculture plays an important role in the seafood industry in the Maritimes Region. Fisheries and Oceans Canada, in collaboration with their federal and provincial partners and through regulatory regimes, policies and scientific research is helping the aquaculture sector grow in a responsible and sustainable manner in many of the Region’s rural and coastal communities.

The Maritimes Region's science staff conducts monitoring, surveys and research vital to (1) providing advice for policy and decision-making, (2) assessing the effectiveness of management actions and (3) warning of impending hazards in the ocean. While much of the science work is focused in our region, regional scientists also participate in studies much further afield, including in the Arctic. A major focus in science is also to manage the data and information generated by these activities so that they are secure, accessible and re-useable.

Regional scientific staff continuously monitors the changing ocean and its influences on marine life. Our oceanographers also perform research to understand and predict changes in the environment of the ocean and ocean processes. This in turn directly supports major issues of importance to Canadians, such as adaptation to climate change, responsible development of marine energy resources and response to emergencies at sea.

We chart, survey, measure, and describe Canada's waters and tides to facilitate commercial and recreational navigation and fishing activities, and we map the ocean floor. Demand for nautical products, such as electronic charts and sea floor maps, continues to grow as Atlantic sea-lanes become busier, fishing becomes more high-tech, and interest increases in ocean development projects.

Commercial aquaculture is one of the fastest growing food production activities in the world. DFO science plays a lead role in research on potential interactions between aquaculture, fisheries, and the aquatic environment in order to ensure sustainable development of the industry.

There is a growing understanding among Canadians of the importance of protecting and benefiting from our marine and freshwater environments and resources. The Government of Canada is using a modern and coordinated approach to manage the impact of human activities on Canada’s oceans, creating a balance between protecting marine ecosystems and maintaining a prosperous economy.

The Maritimes Region provides a lead role in fulfilling the Department’s mandate in the management and stewardship of Canada's Oceans (Oceans Act), aquatic Species at Risk (Species at Risk Act), and commercial, recreational and Aboriginal fisheries (Fisheries Act) through its Ecosystem Management Branch.

Under the Oceans Act, the Oceans and Coastal Management Division leads integrated oceans and coastal management initiatives in the Maritimes Region, including the designation and management of marine protected areas, marine protected area network planning, the coordination of marine planning activities with other government departments and stakeholders, and the provision of information, tools, and advice for marine spatial planning and decision making.

The Canadian Coast Guard, Atlantic Region is headquartered in St. John’s, Newfoundland and Labrador, delivering their services to the DFO Maritimes, Gulf and Newfoundland regions. Canadian Coast Guard services support government priorities and economic prosperity and contribute to the safety, accessibility and security of Canadian waters. It is the marine operational arm of the department managing DFO's fleet and related technical support services and facilities. It supplies air and sea resources to Conservation and Protection and Science programs, including hydrography, as well as to other government departments. The Canadian Coast Guard carries out programs on waterway management, aids to navigation, marine communications and traffic services, search and rescue environmental response, and ice breaking services.

The Canadian Coast Guard operates the civilian fleet of Canada, and as such has a critical role to play as a visible symbol of Canadian identity and as a sentinel of Canada's coastal borders. The Joint Rescue Coordination Centre in Halifax coordinates and controls aeronautical and maritime search and rescue operations on a 24/7 basis. Also contributing to the overall safety of the mariner is the Coast Guard Auxiliary, with approximately 1500 volunteers and 850 vessels across the Atlantic Region.

Primary thrusts include the transfer of harbour operations to Harbour Authorities groups for local community-based management, and the rationalization of remaining fishing harbours to support an active core. The continuing role of our staff is to assist Harbour Authorities with knowledge, advice and finances.

Small Craft Harbours' portfolio consists of close to 400 harbours in the Maritime Provinces. Local Harbour Authorities currently manage almost 300 of these harbours. The remaining sites will be rationalized on a site by site basis.

Ocean management is an international issue

Relationships between DFO Maritimes Region and the United States regarding the marine environment, specifically the East Coast fisheries, have been ongoing for decades. In the Gulf of Maine and on Georges Bank, Canada and the US share some of the most valuable fisheries resources in the world.

The two countries work collaboratively on most areas of mutual concern including transboundary fish stocks and species at risk. The majority of Canadian fisheries-related issues in the Gulf of Maine and Georges Bank are addressed through the Canada/US Transboundary Resources Steering Committee, both co-chaired by the Regional Director General of DFO Maritimes Region. The committee represents a variety of interests within the fishing industry, with Steering Committee members sitting as representatives from the Gulf of Maine Advisory Committee.

The Steering Committee strives to develop complementary and integrated approaches for the Gulf of Maine and George Bank, by overseeing the work of a number of sub-committees and working groups. The scientific sub-committee reviews scientific stock assessments and projections necessary to support the co-management of shared species between Canada and the United States. The fisheries management sub-committee provides a mechanism for developing sustainable harvest strategies and resource sharing agreements for cod, haddock and yellowtail flounder on Georges Bank. Government officials from Canada and the United States, as well as industry officials, continue to collaborate so all parties can benefit from marine resources in a sustainable and economically viable manner.

DFO Maritimes Region is also represented on the Gulf of Maine Council on the Maine Environment. This group fosters co-operative actions within the Gulf of Maine Watershed to preserve a common heritage and encourage sustainable resource use. Its members include representatives from federal, provincial and state governments, and the private sector.